Alien: Let's Get the Hell Out of Here 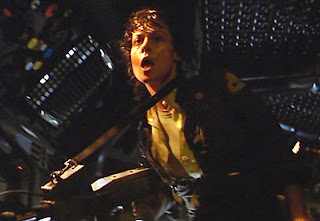 Alien has to be put up on a pedestal as being one of the best science fiction films of all time.  It is a film of ideas and possibilities that takes itself seriously.  What so few movies have today, let alone science fiction movies, is an original story in a believable universe.  Not only did the makers of Alien create a world that seemed possible 100 years in the future  but they also produced a sense of fear and claustrophobia from the get go which would only enhance the payoff later to come.  A horror film with a brain, if you will.  From director Ridley Scott, who also gave us Blade Runner and asserted his legendary status among science fiction aficionados with both movies, he hit it out of the park with this masterpiece and kind of redefined what a sci-fi film could be.


As I’m watching it now, this flick has an attitude.  A personality all of its’ own, aside from the actors and plot, that is due to the direction given.  All of the beautiful model work, especially when the crew approaches the alien vessel for the first time, is exploited in the perfectly mixed smoke combination to make for a surreal setting that would be hard to duplicate using any computer technology.  The lighting used inside the alien vessel was pitch perfect for both the eerie and surreal nature of the environment,  a task which I contest is even harder today when directors use blue screen technology for most of their exotic backgrounds.  When they encounter the space jockey and they are in that huge open area, or when they are wandering around the massive Nostromo, it feels real because it was fucking there.  They built the entire ball of wax from the ground up.  Know I now, I now, in the parlance of our time CGI is the “shiznit”, an amazing tool which when used in the right context and under the right skill set can lead to remarkable effect that could not be done otherwise.  But in the mind of this reviewer, there is just something about films like Alien and, if I may, Blade Runner due to the fact that the models were physically there and the sets were constructed and enhanced, on the spot, to be filmed as seen by the camera.  And as naïve and unqualified as I may be in terms of special effects technology, I tend to agree with filmmakers such as Christopher Nolan who believe that if you can film and photograph something in the real without the use of CGI then it will look more believable. 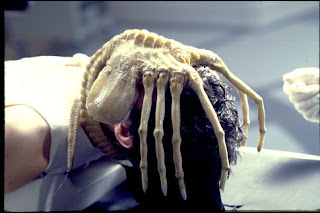 All of this is headed by an original story acted out by an A-list group of actors who each play their part out to a tee.  Harry Dean Stanton and the great Yaphet Kotto, two of my all time favorites, give outstanding performances as the tool pushers who make the ship run {See also Live and Let Die; Friday Foster (Kotto) See also Red Dawn; Escape from New York (Stanton) See them now}.  They all play their parts as human and as real as possible, allowing for the audience to be right with them emotionally.  No one is winking into the camera during this movie.  Sigorney Weaver plays the ultimate female heroine and would continue the role into the next installment with much effect.  By the end of the story the audience is so much with her in that final struggle that the weight is shared on both sets of shoulders until the very end.  And Ash is a character played by the brilliant Ian Holm whose performance only serves to enhance the aroma of fear and paranoia displayed in every frame and sound.  Plus, Tom Skerritt kicks ass (See also Top Gun).
In closing, you could due worse than to pop this one into your videocassette recorder on a dark and stormy night.  The soundtrack alone will make you wish they hadn’t landed on LV-426 and just stayed in hyper sleep.  A B-movie plot, written, directed and made by A-quality talent that has often been imitated but never quite duplicated.  Bring back life form.  Priority one.  All other priorities rescinded.  This is how science fiction horror should be handled and made.  Bludgeon and batter away the awful memories of Alien 3 and Alien Resurrection because the first one is still the best and it had the mother of all sequels in the spectacular Aliens that would follow it.  But this story shall also be told . . .