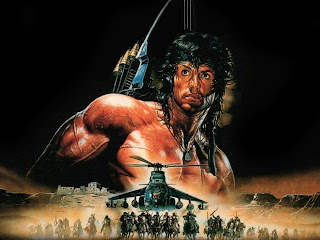 There is really only one thing that a man can say about this flick:  F’ing A+.  If you're going into this with the expectation of leaving the movie with a deeper appreciation for life, then you're shit out of luck.  This movie is about bad people who need to be killed in creative ways and there is only one son of a bitch that can do it: John Rambo.  IF you are reading this and HAVEN'T seen First Blood, then go and see that.  Take it in for being the best of the series.  All of the things that Rambo does in it to survive seem possible if a man was pushed to the brink.  Rambo: First Blood, Part II pushes the mythos even further by having him return to Vietnam and perform actions that are a little more superhuman but never-the-less awesome.  Watch these two nuggets before you go on the journey that completes the trilogy.

Rambo III is one of those films from my childhood that stuck with me, although I didn't realize it until watching it again for the first time about a week ago.  We had the VHS tape in my house when I was a young padawan, so that scene of him cauterizing his stomach wound with gun powder himself was burned into my head at a young age, and I am glad for it.  The story is simple: Rambo goes to the Middle East, Afghanistan specifically, to rescue his old mentor Col. Trautman from the clutches of the bad Russians that are occupying the land and flying around in advanced helicopters, making a lead salad of everything they see.  What the movie lacks in character development and general story it makes up for in every other way that it should.  The introduction came in the first film and continued on a lesser note in the second, so by the third, fans don't need the old 'why is he like that?' story.  We know John is tortured from his past.  We know all he was looking for was something to eat.  We know that he is searching for peace.  And, oh yeah, he has killed more people than all the Tic Tacs you’ve had in your life.  And that is all you need to know.  This is an action piece, a great 'B' movie, if you want to call it that, but it is so much more.


There are definitely a couple of things that stick out for me.  Stallone plays it so serious that by the end of the movie, you are almost convinced that Rambo could have won World War II by himself.  He doesn't wink at the camera or let on that his world is fantastical.  He hurts, bleeds, and gets the job done, but never plays it funny.  This might not seem like much, but in some movies its’ as if you know the actor came in for two months and cared more about getting his double cafe latte every day than making something brutal and real.  Stallone made it a point to look like the perfect male in the 80’s and while his whole persona has been parodied time and again, not many people have been able to do action more convincingly.  And although this thespian is not for some, if you like him, then this movie should especially be for you. 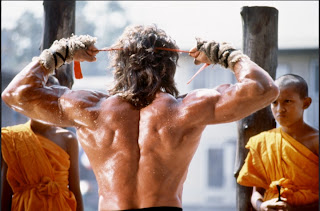 As I was saying earlier about character depth and story, this movie does come up a little short, but that is also a blessing really.  An example is the Ruskie Commander Zaysen saying to Trautman, "Who does dis man tink he his, God?"  Trautman: "No.  God would have mercy.  He won't."  I mean, with lines like these, I don't think Richard Crenna was winning any SAG awards in the late 1980's, but that also makes the movie.  Rambo, by this point, is a mythical character, so it’s only good business sense that everything else should match up.  When Rambo is going to kill 88% of the cast by the end of the movie anyway, why bother making them anything but horrible.  My favorite moment from the movie would have to be near the end, when John let's out a bombastic roar while playing chicken with the enemy that only Stallone would attempt to put in every movie.  But it's okay, because Rambo is an animal that's real good at killing, so he can scream his head off all he wants.
I guess you have to watch it to know what I mean.  With this film, you learn a couple of things.  One, if you are going to kill a soldier or a whole platoon, it is always better if there is a sound guy on hand with you to throw in a couple of slasher-techno chords right before the deed is done.  Two, if the entire U.S. Army would issue explosive arrows to their troops and be taught to use them like John, the United States could take over the Middle East in a couple months time easily.  And three, if you are going to try and convince Rambo that he is a born killer and that he should fight your war, don't use a shitty sculpture analogy that takes four minutes just to explain(Trautman, you fool!).  This movie has a lot of good stuff going for it, and for better or worse if I was in the forest with a bleeding wound, I too would try to cauterize it with gun powder by myself.   But I don't want to ruin the film for you, so just put it on your Netflix and thank me later.  Can you tell me that you have you ever seen a guy fall and snap his neck from a noose around it and THEN get blown up from a grenade in his pocket?  I didn't think so, you son'bitch.  On those grounds and the fact that John has protected your country for the better part of thirty years, go get Rambo III today.