The Book of Eli: Apocalypse Now Say what you want, but Denzel Washington has a way of making any film he is in or any part he plays more human than what might be on the page. Glory, Malcolm X, Philadelphia, The Hurricane: these are films that need and deserve to be seen because of the humanity that oozes from this actor in many of the roles he plays. In The Book of Eli, he plays a man struggling to survive in a post-apocalyptic world where everything has gone to hell. Almost. Clinging to an old I-Pod and armed to the teeth, Eli marches across the now-open world of America in a peril less quest to deliver a book to the right people. I felt his weariness and isolation on screen as he battles individuals with no law or moral code to speak of in a world that no longer cares. Carnivores run rampant in this place and the most valuable resource has become the one most essential to survival: water.
The great Gary Oldman plays the antagonist to Eli who believes in another set of virtues that comes into great contrast within the film and provides for a great showdown of beliefs. Although some of you will be turned 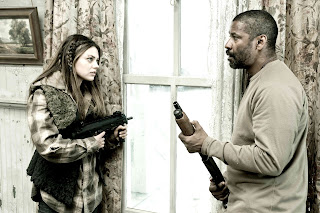 away by the religious nature of the story, I would suggest viewing the film as a good versus evil tale in a world where the retched multiply and the righteous suffer beyond measure. If the time comes when all of our established niceties and social order comes crashing down upon us, faith might be the only thing left to believe in. Not a perfect film, but with damn good performances and a detailed world to view them in, you could do worse on a Saturday night. And it has Denzel, if you didn’t already know.