The Empire Strikes Back: He Will Join Us or Die, My Master 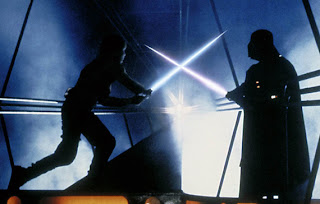 If you are not a complete moron, then you already now that The Empire Strikes Back is probably the strongest and best-made film of the entire Star Wars canon. A New Hope started it, Return of the Jedi made it teddy-bear friendly, and the prequel trilogy almost destroyed the adventure in a galaxy far, far away. But in one defining move prior to its’ 1980 release and before his yes-men green-lit The Kingdom of the Crystal Skull , George Lucas made the perfect call in hiring former mentor and teacher Irvin Kershner to helm directorial duties on his sequel to Star Wars. Kershner was more interested in the character’s relationships and growth than the special effects of the film, which Lucas and ILM handled with considerable success. His patience with the acting and his guidance on how the Han and Leia romance should be handled and how Luke would evolve further along the Jedi path made for a science fiction fantasy that took itself seriously. What he produced was the most mature and grown up film in the series, which has made it all the more entertaining and enduring since its’ debut almost thirty years ago.


Like a great James Bond film amongst the plethora of failed entries, Empire has it all. The two word sentiment from Han Solo to Leia just before the carbon freeze that cemented his status as the coolest character in the trilogy. The relationship between Yoda and Luke, brought to life by the amazing puppeteer Frank Oz and the wonderful acting of Mark Hamill, that brought a new sense of emotional depth to a series

that was modeled after a Saturday afternoon serial. The Hoth battle, the asteroid chase, Vader force-choking British underlings, and Billy Dee Williams. The list goes on and on. The perfection that was put onto celluloid here is clear when viewing The Phantom Menace and Attack of the Clones. While these newer films blaze with artistic imagery and an incredible sense of CGI wonder, Lucas neglected to write stories that were interesting as a stand-alone project and delved even further into cringe-inducing dialogue that would make a Billy Goat puke. Empire is Oscar-caliber by comparison. The ultimate moment between Darth Vader and Luke fighting on a platform in Cloud City has come to epitomize all that is remarkable and worth-while in this created universe for me. And the movie has Boba Fett. Nuff’ said.