Surrogates: The Baldness of Bruce 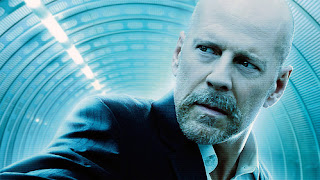 There comes a time when Bruce Willis must put down his martini, leave Demi and Ashton with the kids, and save the whole wide world.  As we all know, the fate of mankind has always rested with one individual equal to the task, and in this respect I thank the movie Gods that we have Bruce.  He’s overcome asteroids the size of Texas, found and protected the messiah of Earth all the while battling Gary Oldman, and helped to get the humans ‘back on top’ after a virus virtually wiped out the population (See also Armageddon, The Fifth Element, 12 Monkeys.  Maybe the first one not so much).  Not too bad for a guy that also made The Color of Night and survived.  While not always pumping out solid gold pieces of work, Bruce Willis has, aside from obvious acting chops, the demeanor and attitude of a real guy that we want to see succeed in the most impossible situations.  And as far as impossible situations go, Surrogates provides a real doozie for our star.  In Jonathan Mostow’s latest film, the whole world is dependent upon robotic avatars that represent each individual in society while the users relax comfortably in their homes.  The end of physical social interaction itself.  No colds and you get to wear you pajamas all day long.  That has to be a good thing, right?

Also starring Ving Rhames (together with Willis for the first time since Pulp Fiction) as The Prophet, leader of the human resistance opposed to the use of surrogates, and James Cromwell as the man-of-many-years creator of surrogate technology itself Dr. Lionel Canter (See also L.A. Confidential, Star Trek: First Contact, and W).  Cromwell is one of those actors that have a face everyone knows but might get lost in the translation for a name.  Ironically enough, he played the same role as the inventor extraordinaire of robot advances in the other pretty recent sci-fi flick I, Robot.  In regards to Surrogates, the movie flows much as I, Robot did.  The science fiction is firmly rooted in the evolution of robots in a futuristic society while the lead character slowly unravels a mystery that involves the new machines in a sinister plan.  Let me be clear here: this is not a bad movie.  In entertains, it provides the sights of a slick mystery/action film, and makes use of great effects to create the surrogates and recreate the hairdo of our pretty bald star.  While it does glaze the surface of what might change in a society like this, from transsexuals going out in a surrogate of the opposite sex to people now having really poor hygiene and appearances, other big questions are avoided or simply not asked at all.  What about the muscle atrophy of people sitting in chairs for fifteen years?  And the fact that crime has almost vanished, including murder, seems rather impossible.  What’s to stop a surrogate from just going to a human user’s domicile and cleaning house?  The crazies will always be crazies and I do not think that a world of surrogates would stomp out the human factor of aggression and blind violence.  But I’m a romantic, though, so . . . 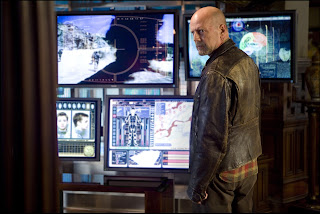 In hindsight, this is a film that works within its’ structure and genre pretty well, despite the shortcomings.  A lesser movie than Die Hard 4 was, both films share the aspects of some spectacular action sequences, high production values, rather good casts, and their lead, Bruce ‘Who Gives A Shit About Glass’ Willis.  While maybe not on par with Steve McQueen’s title as the ‘King of Cool’, Willis has earned his stature as one of the leading icons of our times amongst the ranks of others such as Clooney, Pitt, Penn, etc.  Although the movie lacks something needed for repeat viewings and may not trigger a ton of chatter and discussion after it finishes, it never-the -less delivers an entertaining spectacle and allows its’ star to do what he does best: connect with madda fuckers.  And if you have not yet seen the masterpiece that is Die Hard, then you need to un-bastardize  yourself and bathe in the awesomeness that John McTiernan has poured out for you.  Shame on you.  It has Carl Winslow as a cop in it, for Pete’s sake.